Light of the Bhagavata Illuminates Shopping Center in Brazil 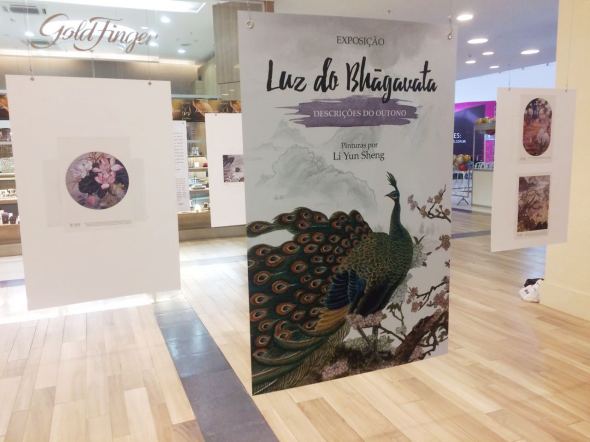 Display panels in the exhibition Light of the Bhagavata. In the foreground is the cover of the last edition of the book in Portuguese.

Many works of art with sacred themes have been painted under the inspiration of ISKCON-founder A.C. Bhaktivedanta Swami Prabhupada. These paintings were originally intended to illustrate books by Prabhupada, author of many original writings and translations, and were also meant to decorate temples and houses of devotees of Krishna.

The world, however, moves on, and today we have something that probably was not predicted by those artists of the last century: their paintings are given many other purposes, such as becoming wallpapers on smartphones and highlights of Krishna-conscious Power Point presentations.

And now, these Prabhupada-inspired paintings have arrived at a new, unusual place: a shopping center in Brazil.

No. There is no devotee at the door of the building offering books of Srila Prabhupada to the passers-by. What happens at the Via Vale Garden shopping center, in São Paulo state, is a stunning art exhibition featuring the paintings of The Light of Bhagavata, a book written by Srila Prabhupada and illustrated by the Chinese artist Li Yun Sheng.

The shopping center in Brazil that hosts the art exhibition based on Light of the Bhagavata book.

Seiti, an employee of Coletivo Editorial, tells us that this is the second such exhibition they produce there. Previously, they produced an exhibition on the book Here Comes the Sun, which talks about the musical and spiritual career of George Harrison, on the occasion of the death anniversary of the former Beatle.

“The present exhibition, which displays some of the excellent illustrations of the artist Li Yun Sheng presented in the book The  Light of the Bhagavata, was motivated by the arrival of autumn in Brazil, having relation with the contents of the book, which contains verses of Krishna’s teachings referring to this season,” explains Seiti.

Seiti tells us that when he joined Coletivo Editorial’s marketing department, he brought some of his contacts to broaden the reach of publishers represented by Coletivo, such as BBT, which publishes Light of the Bhagavata. That was how the partnership with the shopping center begun, now hosting the beautiful exhibition.

The paintings certainly are the great attraction and the first great impact on the passers-by, but the teachings of Srila Prabhupada also become completely present there. Below the exposed paintings are excerpts from the book, and the book is available for purchase in a bookstore inside the shopping center. 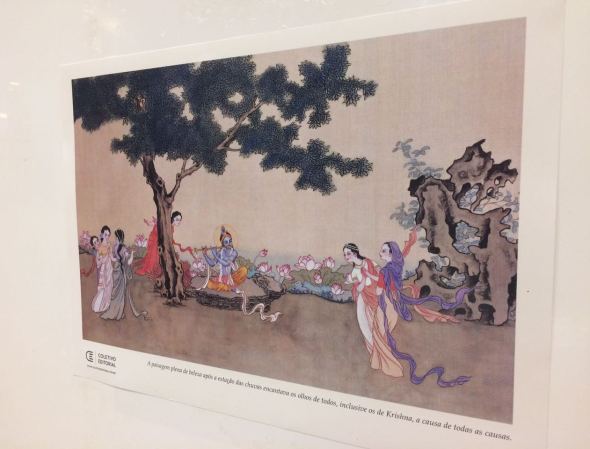 One of the most appreciated paintings, with the caption “The fully beautiful scenery after the rainy season was attractive to the eyes of everyone, including Sri Krishna, the cause of all causes.”

The exhibition has just started and it is impossible to tell what the demand for the book and the general interest will be, but based on the exhibition of Here Comes the Sun, Seiti says he has high expectations. It also helps that besides the exhibition being very well designed, it happens to be displayed in one of the most crowded corridors in the shopping center, close to the main event plaza.

Mateus, initiated in the Hare Krishna Movement as Narada Muni Dasa, is another member of Coletivo Editorial in charge of the exhibition. He speaks of his feelings as a follower of Srila Prabhupada: “I have a great feeling of satisfaction! I could visit the exhibition countless times and still feel inspired. And because I had the privilege of having participated in the production of this book, following the whole process, I am happy that the work is going beyond its purpose as a book, giving people the chance to marvel at its beautiful paintings and descriptions. I believe that any opportunity to showcase paintings, photographs, texts and books of Srila Prabhupada should be seized. After all, the world needs to know him.”

Display panel presenting the exhibition, with information of the book, the author and the artist.

Narada Muni reminds us of something very interesting about the book. From the very beginning, the book was intended to be an “art exhibition” – in fact, it is the only book of Srila Prabhupada with this feature. “The exhibition focuses on the aspect of the book that was initially desired by Srila Prabhupada when he was invited to attend a world conference held in Japan.”

Always very aware of the specifics of the audience he would speak to, Srila Prabhupada knew that Oriental people were very fond of nature depictions, so he devised a presentation centered on Light of the Bhagavata and its autumnal descriptions, enriched by beautiful paintings. However, due to unforeseen circumstances, this exhibition have never happened in Japan – but it did so a long way away, in the country of soccer and carnival. 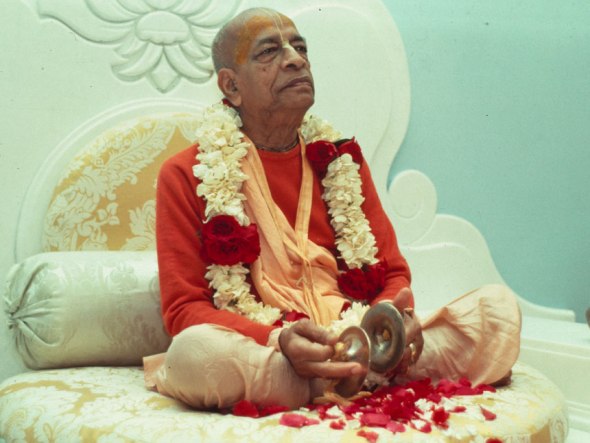 Srila Prabhupada said he would always live in his books, and anyone who knows this fascinating teacher of the wisdom of bhakti-yoga knows very well his dynamism and his interest in reaching all kinds of people in all kinds of places.

It seems that his dynamism and universality is also manifested in the form of Light of the Bhagavata art exhibition, confirming the immortality of Srila Prabhupada.